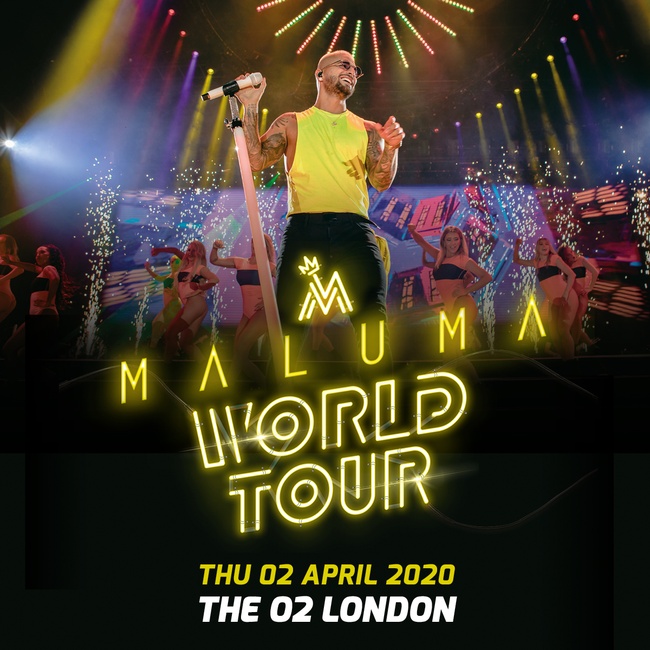 Following his sold-out UK date last year, one of the leading voices in Latin music Maluma, has announced a huge show at The O2 London on Thursday 2nd April 2020.

The 2018 Latin GRAMMY award winner for Best Contemporary Pop Vocal Album (for F.A.M.E.) is one of social media’s most popular artists with over 23 million Facebook fans, 6 million Twitter followers, and a whopping 46 million Instagram followers (making him the leading Latin male artist on Instagram). His official YouTube/VEVO channel has garnered over 9 billion views and has more than 22 million subscribers, having earned him a YouTube Diamond Play Button Award.

His 2017 Maluma World Tour achieved unparalleled success, having sold over one million tickets in 105 worldwide concerts in 2017 alone and making Maluma the top concert-selling Latin artist in the world. In 2018, he broke records achieving full houses in all of his shows throughout the United States and Europe with his F.A.M.E. World Tour selling out the Madison Square Garden arena (New York), the American Airlines Arena (Miami) and two The Forums (Los Angeles), among others.

With his 11:11 World Tour, the box office giant, is taking the world by storm once again. This summer he sold out shows in Poland, Portugal, Hungary, the Czech Republic and Morocco, where he attracted a crowd of 200,000 people. Maluma is now in the midst of the Sold Out North American leg of the tour and is excited to return to Europe and the UK next year.

Maluma’s 11:11 World Tour concerts underscore his versatility as an artist with a brand new state-of-the-art show that is futuristic and visually charged with lasers, audio-visual effects and pyrotechnics presented in a way never before seen in a show by a Latin music artist. Backed by his live band and twelve dancers.

Maluma will perform a very special show at The O2 London on Thursday 2nd April 2020. Tickets go on sale Friday 11th October at 9:00am and will be available from www.gigsandtours.com